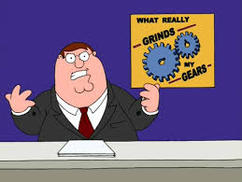 I'm often told by my less active work colleagues that cycling, particularly in Sydney, is too dangerous and not beneficial to your health. This is really beginning to grind my gears!

Therefore let it be known that:

So F### You people! Stop making bloody excuses and go and do some exercise!
Can someone explain to me how the 'Special' at Coles on Avocados works - You get 2 for $3.70 but 1 avocado costs $1.75. Perhaps it's because you have to be special to go for that once in a lifetime deal. Who are they kidding?...really. It's about time these big corporations gave us a proper special deal instead and stopped screwing with our minds. This bullshit is really beginning to grind my gears!

So F### You Coles! Stop making bloody non-existent deals and give something worthwhile back to your loyal customers!

Fuck you Jetstar. If I pay for 80 kilograms of luggage, what difference does it make if I put it in the cargo hold or take it as carry on. Flying back to Sydney from Cairns the bloody miserable old cow at the check-in refused to let me put the majority of my luggage in the hold. She had sent my wife's carry on suitcase through to the plane so we had one less bag to carry on. But instead of letting us take 10 kilos on the plane and 70 in the hold she applied the 'regulation' and said I had to empty my suitcases until I had just 60 kilos in the hold. This was a real pain in the arse because we didn't have any bags and when we had stuffed the sleeping bags and camelbak's with clothes she saw we had 5 bags and said that if we turned up at the gate with more than the 4 bags as per 'regulation' they would not allow us to fly.

This bullshit really ground my gears!

So F### You Jetstar! and the old, miserable hag at check-in. Stop applying bloody stupid, nonsensical regulations and get yourself staff with a bit of personality and common sense!

Are you bleeding kidding me! How the hell does that make sense. Buy in bulk at Coles to make a loss.
You're a bunch of morons Coles. This nonsense is really grinding my gears!

Fuck you Work! How do you expect me to come back to all the bullshit after 16 days of bliss and freedom?

How great life would be if we didn't need to earn money to survive.


The Rat Race is really starting to grind my gears!

Fuck you Coles Customers! Why don't you pack your own fucking bags. You stand there and complain about the queues but then let some poor young teenager try to fit your crap into their plastic bags and then have the audacity to complain that they don't pack them properly.


Is it an Aussie thing because in England it's only the old grannies who get their bags packed. So unless you are handicapped, mentally-challenged or aged then do it yourself because you are not that important. What is more Mr and Mrs Thoughtless Customer - You are encouraging more environmental damage with those wasteful, unnecessary plastic bags. Bring your own from home, why don't you?

This thoughtless, selfish and downright lazy behaviour is really beginning to grind my gears!

Fuck you Aussie Car Drivers! Why do some of you drive in the outside lane 20 km/h below the speed limit. Don't you realise everyone is overtaking you on the inside and getting thoroughly pissed off. But you just carry on your merry own way, oblivious to the stares and scowls from passing drivers.


Some of you move into the right hand lane in preparation to turn right. But when that turn off is not for another 5 km then this is not a smart move. So wake up to yourselves and learn to drive a car properly.

This thoughtless, unnecessary behaviour is really beginning to grind my gears!

What is it with people saying they gave it 110%! Damn you for this is not possible. Didn't you study percentages at school? Only 100% is possible so don't try and con people and sound more impressive by saying a higher number. You are obviously full of shit or just plain dumb.

This irritating exaggeration is really beginning to grind my gears!

What is it with people saying they gave it 110%! Damn you for this is not possible. Didn't you study percentages at school? Only 100% is possible so don't try and con people and sound more impressive by saying a higher number. You are obviously full of shit or just plain dumb.

This irritating exaggeration is really beginning to grind my gears!

What is it with this bloody cold weather at the moment  Went for a morning ride in the Hunter Valley with a 'mate' last week and the temperature was touching minus 5.It's not supposed to get that cold in Australia. That's why I moved here from England. For good, warm weather.To make matters worse, I turn to my riding partner and he is wearing thermal gloves, woolly shoe warmers, winter jacket and a scarf. Didn't tell me, did he! This damn right selfish behaviour is really beginning to grind my gears. Fact is, my cogs are all frozen so it's more like crunching my gears. Warm up Australia, why don't you?...